Nvidia RTX 2060 And 2060 Super are the two latest-gen midrange GPUs that promise to excel in Ultra 1080p gaming.

The original RTX 2060 was released back in last 2018 and was criticized for its relatively high price (understandably due to advanced features like ray tracing and DLSS) despite being a low-tier product in GPU hierarchy. This prompted Nvidia to release GTX-based 1650 and 1660 Cards.

And in late 2019, due to ever-increasing pressure created by AMD in the midrange GPU market in the form of Navi-based graphics cards, Nvidia released the RTX 2060 Super graphics card.

RTX 2060 Super brings the 10-15% more power, and has indirectly resulted in price decrease of the original RTX 2060. It provides the same level of performance as you get in RTX 2070, but consumes slightly less power than the latter and produce less noise as well.

Overall, RTX 2060 and 2060 Super provide good 1080p and 1440p (only if you decrease other settings) gaming experience, and if you have any interest in utilizing the ray-tracing technology in a not-so-huge budget, you should take a good look at these beauties.

But having PC components powerful enough to produce ultra-realistic graphics is just one part of the equation. You need an equally good gaming monitor to display those stunning graphics.

And it applies in overall PC gaming as well.

You can’t just update a single PC component of your overall outdated rig and call it a day.

Coming back to our topic, here we have 3 monitors that we think are most suitable for your RTX 2060 And 2060 Super graphics cards. These monitors belong different price sections as well as screen sizes.

So, without any further ado, let’s begin.

For most people, gaming monitor means a big display that costs a fortune.

But that couldn’t be any further from the truth.

Yes, gaming monitors can be really expensive but not everyone needs those 4k 35-inch displays with 240Hz refresh rate.

The point I’m trying to make is that gaming monitor come with different sizes and features, and you can find a suitable option even if you’re somewhat low on budget.

One of those affordable gaming monitors is the Optix MAG241C by MSI.

Despite being labelled as a gaming monitor, its design isn’t over the top. Its thin bezels and 1500R curve make it a good option for multi-monitor setups.

In terms of connectivity, you get a DisplayPort 1.2, two HDMI 1.4 ports, and a headphones jack along with a dual USB 2.0 Hub

The one thing I liked here is the user-friendly OSD. It can be navigated by either using the OSD-joystick at the back of the monitor, through the desktop application, or even through Android MSI Optix software.

You get different presets here such as Racing, RTS, Cinema etc. Other things you can change here is the brightness, contrast, sharpness, and the RGB color settings.

Based on a VA panel, the Optix MAG241C offers a static contrast ratio of 3,000:1. It’s very high than the usual 1000:1 ratio we get in IPS and TN panels, and enables the monitor to have more detailed shadows.

While the color accuracy and consistency here can’t be compared with that of an IPS display, you do get rich and vibrant colors which makes playing some AAA titles, the ones that have a cinematic touch ( Assassins’ Creed Odyssey, for example), a really pleasureful experience.

One of the heavily-criticized area in VA panels is response time. Since they produce deeper blacks, it takes longer for pixels to change into lighter shades. This results in ghosting of fast moving objects, especially in a dark scene.

This issue isn’t a deal-breaker for mos of us, but some FPS gamers find it really annoying and prefer TN panels as a result.

While this feature helps in reducing the perceived motion blur, the screen will be less bright and you cannot use it with AMD FreeSync. This is the reason why you should only use this feature in fast-paced competitive games.

My only concerns with MSI Optix MAG241C are its tilt-only design, no sRGB preset, and no speakers.

If you can live with these minor hiccups, Optix MAG241C is a solid budget-friendly monitor for your RTX 260 and 2060 Super graphics cards.

It’s not suitable for color-critical tasks though. So if you do anything with colors professionally, you may have to look somewhere else.

For the last few years, ultrawide monitors are getting more popular with each passing day.

The only thing now that’s stopping these wide screens to gain even more dominance is their increased price. Most ultrawide monitors cost more than 500 bucks which, although not too much for graphics designers and other professionals, is not something many PC gamers can afford.

Keeping this in mind, LG has tried to shake thing up a bit, and has released the 34WK650-W – an IPS-based Ultrawide monitor that doesn’t affect your wallet like many of its competitors.

Design wise, it looks like most modern display with thin bezels at the top and sideways. While these bezels are colored black, the rear side is completely white and this is also the reason for the suffix ‘W’ in its name.

This white color blends well with the silver color of the stand.

The connectivity panel on the back includes DisplayPort 1.2, two HDMI 2.0 slots, and a headphone jack. There’s no VGA and USB port, which may annoy some folks out there.

One downside of its relatively low resolution is the pixel density of only 81 PPI and the occasional grainy images. But this is a rare exception rather than the norm. Also, you can’t argue much in the price range this display comes in.

Moreover, while you do get HDR10 here to increase the brightness and contrast levels, it’s only software-enabled – which means it’s not as good as the true HDR. A standard HDR monitor should have at least have a peak brightness of 600 nits while this one comes at only 300 nits.

In simple words, it means that the HDR here is a hit or miss. Sometimes the content will have better image quality indeed, but sometimes there’ll only be some over-saturated colors.

On the other hand, I liked the fact that it needs very little calibration out of the box and has a user-friendly OSD menu that can be navigated through the joystick located beneath the screen.

The OSD has different presets for different types of gaming genres, such as FPS and RTS, and also has features like Black stabilizer and Dynamic Action Sync. These features increase visibility in the dark areas and enables responsive gameplay respectively.

All in all, LG 34WK650-W is pretty great option for playing games, watching movies, with some web surfing here and there. While it doesn’t come with many high-end bells and whistles, all the core functionalities are well executed.

But if you’re someone who does a lot of reading and writing, there are other options available with smaller screens but higher resolutions. 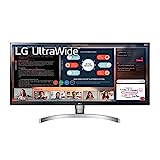