The core i3-10100 and i5-10400F belong to the Intel’s latest Comet Lake processors series and target budget gamers.

Coming in at $122 and $157 respectively, they compete directly with the Ryzen 3100 and 3300X CPUs – both of which have been recently released and are liked by the majority of tech reviewers – especially the 3300X.

Although both of these processors are different in terms of specs as well as performance, we decided to published motherboard recommendation for both of them together in a single post, for two reasons.

First one is the price. There’s only $35 price difference between them. The Second one lies in their name: both are the non-K Intel CPUs.

The i3-10100 comes without any suffix which means it can’t be overclocked, while the ‘F’ letter in the 10400F means that it doesn’t come with any integrated graphics unit and you would have to use a discrete graphics card of your own.

On the other hand, the 10400F is slightly beefier with 6 cores and 12 threads. The base clock is slightly lower this time with 2.9 GHz, and it makes up for it in boost clock frequency which is 4.3 GHz.

Although we’ve yet to see how these CPUs perform in real life, the i5-10400F looks a better option – at least on paper – because you get extra 2 cores and 4 threads in just $35 more.

That being said, I would also recommend you to consider AMD options, especially the 3300X. A big advantage 3300X has over 10100/10400F is its 7nm microarchitecture.

Now that we’ve discussed the difference between these two processors, let’s talk our main topic: motherboards for these CPUs.

The new comet lake processors require a new CPU socket called LGA 1200. Since this socket has more pins than the previous LGA 1151 socket (due to more power consumed by these CPUs), you cannot use new 10th-gen CPUs on older Z370 and Z390 motherboards, and the new Z490 motherboards are your only option.

Costing you almost 150 bucks, Asus Prime Z490M-plus in one of the cheapest Z490 motherboard you can pair with comet lake processors.

It’s an mATX variant of the bigger Prime Z490-P and offers lesser bells and whistles in a smaller price. Like other prime series models, it has back and silver color scheme with some diagonal-shaped lines on the PCB. This color scheme gives a nice contrast to the silver color applied on the VRM and PCH heatsinks.

It comes with an 8+1 DrMOS phase design which I am pretty sure can handle more power-hungry processors as well, let alone 10100/10400F.

In terms of USB connections, you get a lot of options in this board.

The rear panel and the front panel headers can give you a maximum of 14 USB ports. If we specifically talk about the rear panel, you get two USB 3.2 Gen 1 ports, two USB 3.2 Gen 2 ports (one Type-A and one Type-C), two USB 2.0 ports, and a single PS/2 slot for legacy hardware.

For video outputs, we have an HDMI 1.4b port, a DisplayPort 1.4, and a DVI port. The last one can be really handy if you want to rely solely on integrated graphics of your CPU.

The only downsides I can think of is the no I/O shroud and no Thunderbolt 3 support. But, to be frank, you can hardly argue with Asus in this price range. 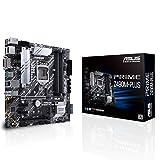 Like B450 Tomahawk Max, Z490 Tomahawk features a black and grey color scheme on the PCB, and comes with extended aluminium heatsink cover that doubles up as the I/O shroud. There’s one more heatsink on the board which is used to cool down the Z490 chipset.

There’s a 8+4 power connection on at its top-left side and it’s, along with 12+1+1 VRM configuration, more than enough to power any of the 10th gen processor out there.

To enhance the gaming aesthetics further, there’s some RGB LEDs underneath the chipset along with some branding on the bottom area of the board.

For faster storage, you get two M.2 slots with M.2 Shield Frozr covers.

There are two PCIe 3.0 x16 slots with CrossFire support for some graphics cards, along with two PCIe 3.0 x1 slots. Both of these slots come with heatsinks, and the top one is steel-reinforced as well, so you shouldn’t worry about your bulky graphics card.

Both 1GbE and 2.5GbE connections are available in this panel, which is certainly a good thing.

The onboard audio is handled by the Realtek ALC1200-VD1 audio chipset  located on the bottom right corner.

In terms of performance, we get same FPS as we got with the likes of Z490 Aorus Master and MSI Z490 Ace – in a number of games that include Metro Exodus, Far Cry: New Dawn, and Shadow of the Tomb Raider.

The same was the case in Power consumption and overclocking, where it punched above its weight and came almost equal to other more expensive boards.

Overall, Z490 Tomahawk has a lot of things in common with the Asus’ Prime Z490M-plus with some competitive edges in the form of 2.5 g Ethernet, extra SATA port, and S/PDIF optical output.

On the other hand, there’s no onboard WiFi but I don’t think it’s as much of a deal as some other features in a motherboard and many gamers prefer LAN connection anyway.

The only thing that might turn away potential buyers is that fact that Nvidia SLI multi-GPU is not supported.