The Ryzen 3 3100 and 3300X are the biggest proof about how much PC components (CPUs, in particular) have evolved over the last few years.

There was a time not so long ago when 4 cores and 8 threads were reserved for only flagship consumer CPUs. The arrival of AMD Ryzen CPUs has changed the whole landscape, however, and now you can get the aforementioned cores/threads in these seemingly ‘budget’ processors.

We have already discussed about graphics cards for 3300X/3100. So, we thought about continuing this series and have a post about CPU coolers for these two processors. After all, a CPU cooler should be capable enough to cool down your processor under load and make it work optimally.

Although the Ryzen 3100 and 3300X have the same 65W TDP as the higher-end 3700X, both of them come with a slightly inferior wraith stealth cooler – instead of the RGB-enabled wraith prism that comes with R7 3700X.

Wraith Stealth is actually a decent cooler that can help you big time if your budget is super tight and you can’t afford anything extra on a CPU cooler. PCGamer.com even managed to overclock the 3100 and this stock cooler was able to withstand the extra heat without any issue.

So, if you’re short on the money, it’s totally fine to use the wraith stealth cooler with any of these CPUs.

With that being said, PC Master Race (PCMR) exists for a reason, and the community is filled with people who love to tweak their builds no matter how small their budget is.

And if you’re one of those folks, these are our recommendations for the best CPU coolers for Ryzen 3 3100 and 3300x.

The 7 X is the last addition in the Arctic’s Freezer lineup of affordable CPU coolers. Coming in at 25 bucks, it promises to be nice upgrade over stock coolers for both AMD and Intel platforms. Let’s find out if it really is.

The base of the cooler is smaller as compared to other competitors, and it’s totally possible that it may not fully cover all the Intel and AMD options. It could be a problem on more power-hungry processors, but as long as you stick with 3100/3300X, you’re good to go.

There’s thermal compound pre-applied on the base, which’ll help you in installing the cooler quickly as well as saving you some bucks by not having to buy a thermal paste on your own.

Apart from this, a universal mounting bracket is also pre-installed on the cooler.

There are two heatpipes that run through the centre of this base and are connected to fins stack of 44 aluminium fins.

Although it’s a budget cooler, the overall build quality is good as it’s made up of high-quality copper and aluminium.

In our testing, Freezer 7 x offered similar thermal performance as Ryzen stock coolers. The area where it excelled, however, was the low noise level. Wraith coolers are known for their higher noise under the load. So if you want some quite cooler while not spending too much, Freezer 7 X looks a compelling option.

In case you want something better in terms of thermal performance, you can check out Cooler Master Hyper 212 as well. It’s slightly expensive than Freezer 7 X, however, which doesn’t necessarily make it a truly budget cooler.

Secondly, it’s bigger than Freezer 7 X which may create problems in smaller builds. 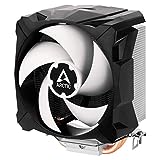 In case you love air coolers but don’t want something as basic as the Freezer 7 X, you can check out the Noctua NH-U12S SE-AM4.

Long name aside, it’s a really good cooler for Ryzen CPUs. Noctua is well-known for its world-class cooling solutions and has produced some of the best Ryzen-only coolers in the form of NH-D15 SE-AM4.

But as good as that cooler is, it’s simply an overkill for most of us. This is the reason why Noctua has produced a smaller cooler for such CPUs and named it NH U12S SE-AM4.

Thanks to its smaller size, you get a virtually 100% RAM clearance.

On its back, you can see a dense fin stack with five heatpipes running through it and converging at the base of the cooler in the form of a U-shaped pattern. This nickel-plated copper base is thick and should make a good contact with your processor.

One good thing I noticed here is that each of the fan corners had a rubber cover which prevents it from vibrating.

For testing, we measured its performance against that of AMD stock cooler and NH-D15 SE-AM4. As expected, it performed quite better than those stock coolers but NH-D15 SE-AM4 was the overall winner in almost every aspect.

It’s definitely not bad though, considering the size difference between both of these Noctua’ coolers.

Like in other Noctua coolers, my only concern is the uninspiring tan/brown color scheme which’ll not blend well with every PC build.

On the other hand, the things that go in favor of NH-U12S SE-AM4 are its compact size, easier installation, quiet operations, and 6-year warranty.

The last option in our roundup is an AIO cooler.

Air coolers are good in terms of build quality and functionality, but nothing really can up the design game in a PC build like a good AIO cooler.

The model we’re looking here is freezer Liquid II 240, a part of the Arctic’s 2nd-Gen coolers. These coolers come with redesigned pumps and promise to deliver maximum performance and lower noise.

The first you’ll notice here is the radiator. Its 240mm radiator, that carries two 120mm fans preinstalled in a push configuration, is easily the deepest (38 mm) I have seen in recent times.

One advantage of such a thick radiator is the wider fin spacing that allows airflow more easily. Wider fin spacing also allows the fans to spin a bit slower to push the same amount of air, which helps to keep the noise levels on check.

Another thing you’ll notice is the fan on the pump for additional cooling towards the VRM area of your motherboard . Lastly, the PWM cable of the fan is integrated into the sleeveless tubing which means less wires for you to handle and overall better looks of your PC.

During the testing, we found the Arctic Liquid II 240 to be better than most of the air coolers (including Noctua NH-U12A) in its price range. Some AIO coolers got better results but I think it’s not fair to compare them considering the price difference.

There’s no RGB involved here but considering that it’s designed for budget PC Builders you can’t argue much here. Another hiccup I had here is the lack of physical manual as only the Digital copy is available.

Overall, it’s a pretty attractive option for budget PC builders who want to have an AIO unit but don’t want to spend a big amount of money on it 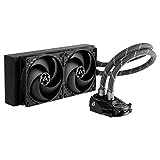