AMD has nailed the last few iterations of CPUs and put Intel on the defense after years of playing second-fiddle.

More and more of us are picking up Ryzen processors due to the awesome balance of price and power, meaning more of us are about ready to finally rip the band-aid off and upgrade that aging GPU.

I know what it’s like to hold onto an old setup for far too long only to feel constant frustration when I can’t even run old games at 60 FPS.

The Ryzen 5 2600 is a fantastic balance between power and speed, and generally competes directly with the i5 8th Generation series from Intel. Cheaper with way more threads, the Ryzen 5 2600 annihilates its direct competition.

Overclocking can even yield gains 19-20% higher than a comparative i5, and this is one big reason why you should prioritize cooling in the longer run as well.

Coming back to our topic, whether you are building a new gaming battle station or finally ready to get modern with PC Gaming, our hardware roundup will walk you through some sweet new GPU options to take advantage of your Ryzen 5 2600 Processor.

Several years ago I didn’t future proof my machine, I got the cheapest GPU I could find and found myself hitting hardly 30 FPS with new games after just a few months.

Don’t make the rookie mistake of slapping an outdated card into your gaming rig just to shave off a few bucks.

Our entry-level card, the Gigabyte Radeon RX 5500 XT Gaming OC gets a boost from that powerful 8GB of VRAM and has earned its place as a budget level card capable of pushing your gaming rig to a smooth 60 FPS in 1080 and comfortably hold its own even in the 1440p arena – if you lower other settings.

We can all afford the optimum balance between power and price of the RX 5500 XT and wish more cards could keep costs low while offering great quality. This card comes overclocked with a base clock of 1647 Mhz and a boosted clock of 1845 Mhz.

In layman terms, that means this card pushes the boundaries of the average RX 5500 XT build by offering more power and getting those buttery smooth frame rates you want in Apex Legends. That also means you should account for increased heat, so don’t skimp on cooling solutions!

The 8GB of 256-Bit GDDR6 RAM is a feature that shouldn’t be overlooked because many larger games are requiring immense amounts of VRAM and that excess RAM can help push graphics further than ever.

Games like GTA V and Red Dead Redemption 2 even have a nifty in-game slider so that you can see how VRAM is affected. You might want to consider thinking about that if you spend a lot of time in Rockstar worlds.

If you haven’t got onboard with FreeSync, we recommend you give that some thought as well.

Most of us can’t even comprehend how different gaming feels when there is no visual tearing at a smooth 60 FPS. Many would take that over a 2K upgrade with choppy visual artifacts. This might be the best choice if you want 1080p gaming at its finest while still living on a budget. 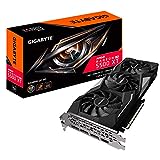 Nvidia has made several strides with RTX series that will define gaming for years to come. The MSI Gaming RTX 2060 Ventus 6GB is not only an impressive card for 1080p and entry-level 2K gaming; the RTX Chipset also takes advantage of one of the most impressive leaps in visual fidelity of this generation.

Nvidia was the first to market and currently is the reigning champion of Ray-tracing technology with numerous games starting to implement the technology. In brief, Ray-Tracing uses a lot of math and some AI assistance to overcome traditional problems in lighting.

The difference is astounding, making visuals better than ever and adding new life to aging games as seen in this Minecraft RTX demo below.

I remember the first time I stopped in awe at a digital sunrise playing Giants: Citizen Kabuto with a Geforce 2 Pro.

Yet for all the beauty, there was an unsettling repetition of textures and deadness to light. Ray-Tracing kicks all that in the teeth making mirrors actually mirror objects, metal shine and scuff, and eyeballs fill with reflections from explosions.

Check out Battlefield V or Control for a good example of how Ray-Tracing is changing gaming forever. Ray-Tracing was undoubtedly my favorite feature of 2019 and 2020 is only bringing more games using this amazing tech into the fold.

A new GPU can be immediately hampered by poor cooling which is why I really like the proprietary TORX Fan 2.0 setup. As lame as raving about fans might be, I became a fan (no pun intended) when an old GTX card started producing visual artifacts every 10 minutes and ultimately would forcefully crash my desktop.

It can’t be overstated how important it is for your system to keep temperatures far below 80 degrees celsius.

You shouldn’t expect to get much in terms of performance at 4K res with the Ventus but 1440p gaming is spectacular.

For those 1440p enthusiasts, this card might just scratch your graphical itch and will probably make you start to question everything you knew about old-fashioned lighting.

Nvidia has usually nailed the best balance of price and power with the mid-range options of the last few years. The GTX 970 was legendary yet we were still shocked when the GTX 1070 came out so soon afterward with a huge performance bump.

With the RTX 2070, Nvidia has once again solidified the card that an enthusiast would find pretty hard to beat. It regularly outpaces the GTX 1080 in FPS while adding nifty Ray-Tracing tech and dropping the price significantly.

We specifically love the EVGA RTX 2070 Black Gaming model as it is a prime example of what an RTX 2070 can be. First the fans (I know. I know. Listen, they matter!) have one amazing feature that few realize they want.

No more phone calls from the neighbor asking why a helicopter is in your office every time you boot up Assassins Creed Odyssey.

For those who aren’t fans of fans, the RTX 2070 still might just melt your eyeballs. Capable of blazing fast speeds at 2K, games start to look crisp and sharp that once felt garbled by pixels. The RTX 2070 can even dabble in 4K gaming (in lower settings), a field reserved for the bravest among us.

One unique feature that EVGA has added is the Powerlink. Traditional GPU’s can sometimes have poor placement of ports. Instead of wrapping power cables through the bottom of your case, the Powerlink gives you just another sweet option for making your PC build sleek and manageable.

I think you might even want to consider a dedicated 1440p monitor for an rtx 2070 as well, if you are going to fully utilize its strength. A high refresh rate and G-Sync is just one more candy-coated touch on traditional graphics that takes graphics to a renaissance level.

Overall, EVGA RTX 2070 pairs really well with a Ryzen 5 2600. At this level of quality, you should be getting the best from your CPU and GPU without reaching one of those nasty bottlenecks where one of your best PC components is somewhat handicapped.

Upgrading an aging GPU is probably the most fun you can have buying a single component of your gaming rig.

Nothing beats jumping into a new AAA Call of Duty release and seeing your old potato quality graphics morph into blistering frame-rates and gorgeous visuals.

PC Gamers are notorious for stretching out parts until they disintegrate. If gaming is your hobby, why spend all that time losing out on the intended quality of your hobby?

If you found the right GPU, you might not regret going all-in on it!

We hope you found one of our picks the perfect companion for your Ryzen 5 2600. Keep coming back for more Hardware Roundups on the latest and greatest in gaming.