Getting the Ryzen 9 (3900X or 3900XT or 3950X) is one of the best things anyone can do, especially if they are upgrading from an older, much slower machine.

The great thing about the Ryzen CPUs is that they scale really well, and the Ryzen 9 3900XT is one hell of a CPU. Whether you are looking to play games on it or you are looking for some productivity tasks like content creation, the CPU can handle everything you throw at it.

However, with a CPU this powerful, you are going to need something that can keep up with it, as well. That is why in this list, we are going to be looking at some of the most powerful GPUs that you can pair with the Ryzen 9 3900X.

Now, you do need to keep in mind that these GPUs are made for not just gaming but for a lot of other tasks like rendering as well as other tasks related to content creation, so it is best if you know this from the get-go.

So, without any further ado, let’s begin our roundup.

Nvidia’s announcement of the Titan RTX was met by a massive surprise mainly because the company did not wait a long time after the release of Titan V, and in all honesty, not a lot of people were expecting that this change was going to come.

The Titan RTX is everything an Nvidia Titan GPU can be and more.

For starters, you are getting 24GB of VRAM; this means that if you are looking to run applications for deep learning workload, or large scale professional workloads, the GPU will have no issues whatsoever that might come in the way.

Another great thing about this GPU is that the Tensor cores have drastically improved and have become so much more efficient and better overall.

If you are looking to use this GPU for the purpose of gaming, then you would be glad to know that you can actually use the Titan RTX for gaming and you would get great performance on 4K. You even have NVLink support in case you want to add another Titan RTX.

As far as the downsides are concerned, the only thing that I do not like about this GPU is the fact that the fan design means that there is going to be a lot of heat inside your case, considering the card does generate a lot of heat on its own.

Overall, I have to say that for anyone who is in the market looking for the most powerful single GPU, you cannot do better than the Titan RTX, albeit at a heavy cost. This GPU is definitely one of the best performers that we have tested so far. Sure, it does get held back by a few factors, but nothing too serious.

Many would say that with the release of RTX series of GPUs, Nvidia more or less revolutionized the industry. For the simplest reason that the company has pushed boundaries in pretty much every single technology that you could possibly think of.

Granted, most of the aspects are still relatively new like DLSS and Ray Tracing but Nvidia’s work has been nothing short of impressive and we are glad to report some really good results, too.

The NVIDIA GEFORCE RTX 2080 Ti is the top tier consumer-grade GPU that is available from Nvidia and in all honesty, it is the card you need if you are looking for sheer gaming performance.

Another good thing is that it performs stellar in Ray Tracing applications, although you might not get the same results that you might be expecting since the technology is relatively new and requires optimization.

The GPU also comes with USB Type C connectivity in case you are looking running displays that can work with Type C cables.

As far as the downsides are concerned, the only evident issue here is that there are not many games that do support Ray Tracing at the moment, but it is also important to know that it is not Nvidia who is at fault here.

In conclusion, if you are looking for the fastest, most powerful single, consumer GPU available in the market, things do not get better than the RTX 2080 Ti by Nvidia. It is just too good and works wonderfully.

Despite being somewhat old, Titan Xp still keeps up with some of the bigger boys available in the market, and if you are looking for something that actually performs really well in both gaming as well as in productivity tasks then you should definitely go for this.

The good thing about this GPU is that you can actually find it for much cheaper considering how it has newer options available in the market to overtake it.

As far as the downsides are concerned, my only issue with the Titan Xp is that the GPU comes with a blower-style cooler, and while it is not a bad cooler, we feel like when it comes to actually cool the GPU, it does not work in the best possible, so that is one thing that you must keep in mind if you are going for this GPU.

Overall, Titan Xp is actually one of the most amazing GPUs available in the market. Granted, we are still looking at a prosumer level GPU but you can easily find it at discounted prices. And that makes it an attractive option.

The last GPU on our list is from AMD. If you have been wondering why we do not have a lot of GPUs from AMD, it is simply because when it comes to GPUs, the company is more or less struggling to keep up with Nvidia in terms of the performance.

Still, the good thing is that AMD has managed to reach some point and things are changing a bit now.

Now there are a number of good things about the AMD Radeon VII. For starters, the GPU can keep up with most of the higher-end options available in the market, so if you are looking for performance from AMD’s side, this is the way to go.

This GPU also comes with additional VRAM that will provide you the benefit especially in games or applications that do want extra VRAM.

Another good thing about this GPU is that thanks to the triple fan design in even the factory version, you have great cooling capabilities that work really, really well.

On the flip side, I do have some issues with the GPU. For starters, the DirectX 12 performance is not the best, you are not getting any support for Crossfire, and the GPU actually draws more power than I thought it would initially.

Overall, the Radeon VII is definitely a promising GPU in a lot of different ways. If you are looking for something that has a robust performance, then you would be glad to know that this GPU is going to do the job without any hassle.

Sure, you are getting a GPU that draws more power but it more than makes up for it with its stellar performance overall, something that will not disappoint you at all. 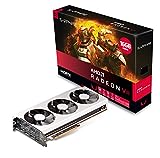 Finding the right GPU for your Ryzen 9 3900X & 3950X can be a difficult task simply because with CPUs this powerful, you are going to need something that will get the job done for you.

But the good news is that the options we have listed will work perfectly and without any major issue.