AMD’s latest and greatest flagship processor, the Ryzen 9 3900X (along with Ryzen 3950X which was released in November 2019) has made some amazing progress in the market and managed to dethrone some of the best CPUs that had made their place in the market.

That being said, if you are building a new gaming PC and at its heart, you have the Ryzen 9 3900X, then the thing that you need to know is that this processor works really, really well with RAM that is high speed.

This is actually something that is consistent throughout all the generation of Ryzen processors; most of them can really benefit from higher speed RAM. This only goes to show that when building a Ryzen based PC, you will need to make sure that your RAM is just as good and you have not cut corners in order to save money.

That being said, we have decided to list down the best RAM for Ryzen 9 3900X. In order to keep thing simple and straightforward for the readers, we have refrained from including too many options. Therefore, this list is going to be short and concise.

However, we can guarantee you that these RAMs will work wonders with your new Ryzen system and you will not have any issues, either.

There is no denying that Corsair has never been shy to bring out some really amazing products into the market. The best thing about the company is that they have something for everyone.

So, if you are not looking to spend all your money on a RAM kit, you can actually buy one of their cheaper options and make do with that, too. Since Corsair does give you the liberty to do so.

With that said, however, the RAM kit we are looking at today is the Corsair Dominator Platinum 32GB; one of the highest-end RAM kits that Corsair is currently selling and for all the right reasons. The great thing about this RAM is it has phenomenal speeds through and through.

While you might not benefit from these if you are on Intel, if you are running the Ryzen 9 3900X, you are going to love these. Another great thing is that when you do turn on the XMP profile, you get a stellar boost in performance that is both noticeable and stable, too.

You can actually tweak the RAM to your heart’s content because the RAM is really good when it comes to tweaking. Oh, and if you are looking for something a bit better looking, you can invest in the RGB version of this RAM, too.

On the contrary, there is not a lot about this RAM that one would not like. In our testing, the RAM worked perfectly fine under all conditions and scored impressive results. We have to say that the Ryzen 9 3900X takes a lot of benefit from the higher frequency, and works like a treat.

Overall, I will say that the Corsair Dominator Platinum 32GB is definitely one of the best DDR4 RAMs that you can buy for your Ryzen 9 3900X. Granted, it is on the expensive end, but the good thing is that the performance n this RAM is just too good.

I still remember the day when G.Skill came out with the Trident Z line up of RAM kits. The world was taken by a storm because these RAM kits were amazing in every single aspect.

They not only looked amazing, but they had insanely good performance, too. Over time, they released a lot of different colour options in the RAM, as well as the much famous Trident Z RGB that took the market by storm.

However, today, we are looking at their newly released Trident Z Neo; this RAM kit only came out a month ago, and the best part about this RAM kit is that it is made specifically for Ryzen CPUs. So, for anyone who is building a new system and is in need of some great looking RAM, this is the way to go. The performance, on the other hand, is also a great aspect.

To start with the good things, the RAM is great thanks to its low latency timings and higher frequency speed at 3,600 MHz out of the box. This is great because as we discussed, all Ryzen processors do benefit from higher speeds, so you are definitely getting something out of the market.

Another great thing about this RAM is that at the price you are paying for this kit, you are getting the legendary quality that G.Skill is known for and not to mention, the gorgeous looks with the RGB. I still believe that the RAM has one of the best RGB implementations that we could think of.

On the flip side, I will be honest, I did not really find any issue with the RAM that could come in the way. G.Skill has made sure that the RAM does give a stellar performance and that it does through and through.

In conclusion, we have to admit that G.Skill has scored a home run when you are looking at the Trident Z Neo. The RAM is one of the best available in the market you can pair with 3900X and 3950X, and the best part is that you are going to get great performance out of it, too. If you are looking for something good and something over the top, this is the way to go and I can assure you that you will not run into any issues that might come in the way, either. 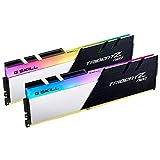 The last RAM on the list is something that is coming from Ballistix. Not many might know about them, but the good news about the company is that they have some great RAM kits available in the market. Whether you are looking for something affordable, or something that is higher and budget is not the issue, Ballistix has you covered.

Today, the specific kit we are looking at is the Ballistix Elite 32GB Kit, this is one of the best RAM kits currently available in the market, and while it is not marketed as a kit that is made specifically for AMD, the good thing is that thanks to high speed, the Ram works wonders and you do not have to worry either.

The RAM looks great; this is specifically made for people who are looking for something low-key because it has all the makings of the RAM of that category. The performance is another strong suit about this RAM, so if you are stressed that you might not get the performance you are paying for.

Overall, I have to say that Ballistix Elite 32GB kit is amazing through and through; it is one of the best performing RAMs available in the market and the best part is that you do not have to worry about the performance being inadequate or anything that might come in the way.

If you are building a Ryzen based gaming system and you want to make sure that there is no performance disparity or discrepancy involved in the process, then choosing one of these RAM kits is the right thing to do.

They are tried and tested, and I can assure you that the performance is going to be on par with what you are expecting.

Products highlighted with a red TESTED means I purchased it, benchmarked it, built a PC with it, and gamed with it to find the best balance of performance and value. Red stars: ★ ★, indicate how many stars I would give the product out of 5.