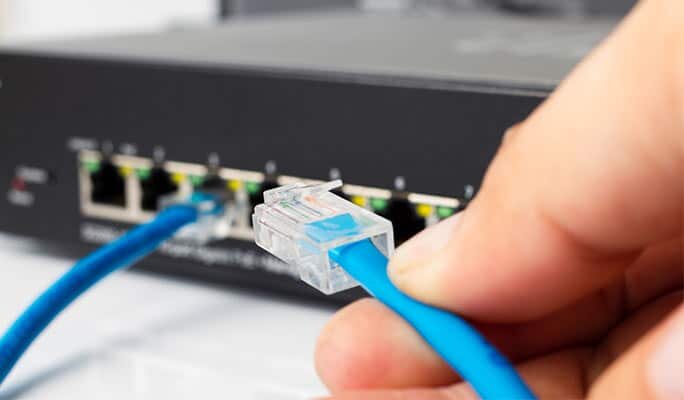 Everyone wants a good internet connection for online gaming.

But how good is good enough, or should I say fast enough, to get you going in the online gaming arena?

In online gaming, latency is the time taken by our computer to communicate with the gaming server.

Since we’ve already talked about it in detail, there won’t be any repetition and we’ll get straight to connection type and Bandwidth.

Most of us prefer WiFi networks due to their convenience and easy setup, but they’re less than optimal for gaming, even if you have a gaming router in addition to a top class cable modem (you can have a QoS-enabled Ethernet switch too, but that’s not necessary if you already have a gaming router).

It’s because WiFi signals are prone to interference.

Ethernet connections are difficult to set up for the first time, but since they’re hard-wired, they give you a better ping rate which in turn helps you play games better.

So, better avoid WiFi connections for your gaming PC if you can.

Internet bandwidth is the maximum rate at which we can download and upload data from our computer.

Think of internet bandwidth as a water-pipe in your home. A wider pipe means more water can come from it.

Same is the case with internet bandwidth.

So, now a critical question may come into your mind

The answer is: It depends.

The internet bandwidth is shared by all of your connected devices at a time. If you’re playing a game, while another person in the house is streaming YouTube videos in 1080p, you’ll probably need a 10+ Mbps internet connection.

On the other hand, simple web surfing only requires 1 Mbps connection.

Apart from this, it also depends on your gaming platform.

That’s why now we’ll talk about different platforms and their recommended internet speeds.

Note: These speeds are only for one gamer in a home network.

Unlike many other platforms, Xbox has clearly stated its minimum bandwidth – which is 3 Mbps – as well as maximum Ping time – which is  150 ms. Keep in mind though, that this speed will be only consumed by a single Xbox user in your house.

So if you want to have internet on other devices as well, this speed limit will be much higher.

On Sony’s official website, it’s simply stated that PlayStation requires a broadband connection to work with, and it doesn’t work on a dial-up connection.

But the important question is what’s considered a broadband connection.

According to FCC, an internet connection with more than 25 Mbps speed is called broadband connection but this definition may not apply elsewhere in this world.

That’s why we recommend you to have the same configuration as you had with Xbox (3 Mbps minimum speed and 150 ms maximum ping time).

Since Nintendo, like PlayStation, doesn’t specifically states its minimum internet speed. So we assume the same as we did for PlayStation  (3 Mbps speed and 150 ms ping) because all three of them are gaming consoles and have many similarities.

Let’s talk about Fortnite, for example. You must have a 3+ Mbps upload speed and a stable internet connection to play it. On the other hand, many gamers think 6 Mbps is the minimum threshold to do same in PUBG. (Fun fact: We have already covered PUBG here)

That’s why it’s better to ask in different gaming related forums and sub-reddits about the internet requirements for a specific game.

Determining an optimal internet speed that can be good for all gaming platforms isn’t as straightforward as it seems. But there is a general census among gamers that 6 Mbps connection is enough for a single player to play any online game.

But what to do if your younger sibling is playing YouTube videos while you’re playing CS:Go?

In this case, your internet bandwidth will be divided among all the connected devices at that time. This way, your gaming experience will be far from ideal.

There are a couple of ways to avoid this situation. Either you should get an advanced router that has QoS (so that you can prioritize your gaming traffic over other network traffic) or increase your internet bandwidth.

Cheap internet rates nowadays mean you can get a much high-speed internet speed than 6 Mbps at a reasonable price.

In my opinion, you should get one that gives you 16+ Mbps bandwidth. But make sure that that connection isn’t capped or have high latency.

Lastly, if you’re unsure about your current internet bandwidth, you can check an online tool (like this one) to have a clear picture regarding your ping and download/upload rates.