The RTX 2060 and 2060 Super nail 1080p gaming and bring buttery smooth framerates well above 60 to the PC Gaming market.

That being said, your new fancy GPU needs a good processor. The RTX 2060 and 2060 super add crazy awesome features like Ray-Tracing that take the realism up a notch in your games but all that power will be wasted if you have a bottleneck.

The CPU is one of the most common bottleneck-area in a modern machine but the good news is that you don’t need to buy glorious threadripper CPU. There are several awesome picks that will take FULL ADVANTAGE of your new GPU while also making your other computer tasks zoom.

If you’ve seen the occasional stutter in a game despite a nice GPU or 16GB of RAM, there’s a good chance your CPU is the culprit.

An underperforming i3 may just nullify all the progress that new GPU is making! While a fully decked out i7 sound nice, games primarily need to only invest in the Ryzen 5 or i5 level processor lines to get the most out of a GPU.

That makes the next part pretty simple for you. I’ve selected the top three processors I’d pair with a shiny new RTX 2060 and think you’ll find all three of these picks the best balance between price, power, and quality.

Starting off our list is the Ryzen 5 3400G from AMD. After years of getting kicked in the ribs by Nvidia, AMD finally brought themselves back into the fight. I love the Ryzen 5 product line for reinvigorating the battle between Intel and AMD.

This card was released just last summer and is relatively new to the market. The 3400G features 4 CPU Cores and 8 Threads and keeps power consumption low by often operating under 65W. The 3400G also has 11 GPU cores with the trademarked Radeon RX Vega 11 series integrated graphics, realistically you probably won’t need to use those cores at all since your fancy RTX 2060 is doing all the heavy lifting.

The Radeon Vega 11 is touted as the world’s most powerful graphics on a CPU but it’s a null feature at this point because you have a GPU already. The Ryzen 5 3400G comes with a nice Wraith Spire cooler. In the last few years, several CPU lines have ditched providing a cooler with processors so it’s nice as that’ll save you an extra $30 or so.

I can remember the disappointment once of getting home to build a new rig only to find I needed to run out and buy my own thermal paste and cooler!

As far as performance goes, the Ryzen 5 3400G will use your GPU swimmingly with very few hiccups. It essentially removes the bottleneck between the GPU and older or less efficient processors (All three of my top picks do actually).

The base 3.7 GHz clock can be pushed way higher as well but I recommend testing your rig for temperature before experimenting and know that it often voids warranties to overclock products. Very few games will demand more than 4-cores as well.

Despite core counts pushing into extremes like 32-cores today, few games can really utilize them efficiently. Some do, but 4-cores is more than enough for modern AAA releases to run flawlessly with your RTX 2060 Super. 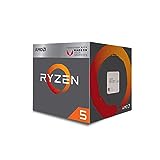 Intel is known as the solid dependable good guy of CPU technology. After railing AMD for the last few years they’ve recently had to pump out even better products to stay competitive meaning nothing but good movements coming from the battle of processor titans.

The i5-9600k is just a fine premium option coming out of Intel’s 9th recent CPU iteration. If you are like me, you are a bit hesitant to go back to AMD, even if it costs a little more.

Intel just has a proven track record and has been the reigning champion for the last decade.

An RTX 2060 Super will perform amazing feats with this CPU and inside of gaming you’ll experience no bottlenecks.

Outside of gaming, things such as streaming and Media creation may take a bit of a hit with the lowered thread count. Intel specifically keeps the i7 line dedicated to hyper-threading and multitasking meaning those in production who game on the side will want an AMD product.

The 9600k comes unlocked meaning you can overclock it. For those with a little bit of experience who get a thrill out of pushing hardware to new levels, overclocking is an intense fun experience.

I don’t recommend being cheap on the Cooler (Intel was sort of cheap and didn’t provide one actually) because the RTX 2060 with a nice CPU will create some moderate heat.

If you want to overclock, a premium cooler or cooling solution like water-cooling is your best bet. Unfortunately, the money you’ll spend on water-cooling probably is best spent bumping up other parts unless you are a diehard 1080p gamer.

That means you can bump up to the next resolution if you are brave. If not, you may want to take advantage of tech like G-sync because you can definitely hit high framerates in the 1080p range with this setup

The 3rd-Gen Ryzen 5 line-up has continued to impress us and the 3600 drops the deadweight of the Vega while bumping the core count and thread count up.

I personally don’t think Vega 11 integrated graphics are much of an edge but if you happened to get this far without your dedicated GPU, be forewarned that this processor needs a dedicated GPU to be any good.

With 6 CPU cores and 12 threads, the Ryzen 5 3600 doesn’t have the same struggle multitasking that a comparable i5 tends to face.

These threads allow it to easily outpace the i5-9600k significantly in unique scenarios like Video Editing. For those who game and work with multimedia, this CPU is an overall win! Gaming never needs more than a handful of threads so traditionally an i5 was the best option.

Since the arrival of streaming, gamers have needed more and more utility from a CPU and the Ryzen 5 3600 sticks the landing. With the ability to edit footage easily, game at blisteringly fast speeds with 2K resolution (You can give a go at 4K, we’d just recommend bumping the GPU up.), and perform well overall, the Ryzen 5 3600 is a great compliment to any RTX 2060 setup.

Technically you can mess around with overclocking as well and squeeze out some more frames but I don’t recommend doing that at this level as it’s risky and needs a good cooling investment.

AMD processors tend to overclock very well but your bottleneck will probably not be the CPU unless you are doing some additional unique activities with this beast of a card.

I can’t remember the last time I legitimately found myself wavering from hardcore Intel fandom but the last few years have slowly nudged me to value both manufacturers immensely. This CPU is one more reason that everything is different in 2020 and traditional notions of PC Gaming Rigs just don’t stand up anymore.

There are almost no cons to the Ryzen 5 3600 and many can find this card lower in price than the i5-9600k. If that isn’t a stunning reason to consider AMD, perhaps you’ll just be happier sticking with the products you know and love.

A new CPU and GPU combo is frankly exciting, and whether you go with Intel or AMD, any of these 3 products will feel blazing fast. I can’t recommend eliminating that old CPU bottleneck as soon as possible.

You might have found one of these three processors to your liking and I’d have to say it’s worth considering an upgrade. Nothing is more annoying than lagging gameplay that hitches regularly. It’s like buffering a youtube video while gaming at the same time and just so frustrating.

With an RTX 2060 and one of out top 3 picks, you’ll be stutter-free in AAA modern games. As always, thanks for joining us as we roundup hardware and show you the best of the best in PC Gaming.