But these aren’t the only things that make them different from each other.

LCD panel technology also plays an important role in defining the overall quality of a monitor.

But before starting discussion about these three technologies, I want to talk about two major concepts related to monitors in general.

These are refresh rate and response time.

What is the Refresh Rate in TV Monitor and Displays

In simple terms, the number of times a still image can be drawn (or redrawn) on a TV or monitor screen, in one second, is called the refresh rate of that screen.

Measured in Hertz (Hz), this term is also called by many as scan rate, horizontal scan rate, and vertical frequency.

We know that videos are a large bunch of images grouped together in the back-end. These images are redrawn, one after the other, so fast that human eye thinks of them as a smooth video. 60Hz monitors are capable of redrawing 60 images on screen in a single second.

Needless to say, more refresh rate is always better when it comes to gaming (and even during other works). In recent times, many companies have started to produce monitors with as much as 144 Hz refresh rate.

Obviously, in order to achieve these higher results, you should have a good quality graphics card too. But you don’t need to be disappointed if you don’t have the budget of a 144 Hz monitor Right now because monitors with 60 to 90 Hz refresh rates can be also be used for gaming.

What is the Response Time in Monitors?

The thing we’re going to talk about now is the response time. Unlike refresh rate, it’s only related to monitors.

Unlike refresh rate, the lower is better when it comes to response time, and lower response time reduces the risk of ghosting (screen burn-in) and gives better image quality.

Often times I see people relating response rate with the input lag. It’s completely wrong because input lag is the duration between the time when you signal any changes to computer (like a mouse click or a keystroke) and the time when that change shows on your screen.

Input lag doesn’t depend on response  time and refresh rate, and companies don’t advertise about input lag either.

Ideally though, you should go for a monitor that has a balanced amount of these three: response rate, input lag, and refresh rate, whenever going for a new monitor.

What is a TN (Twisted Nematic) Display Panel? 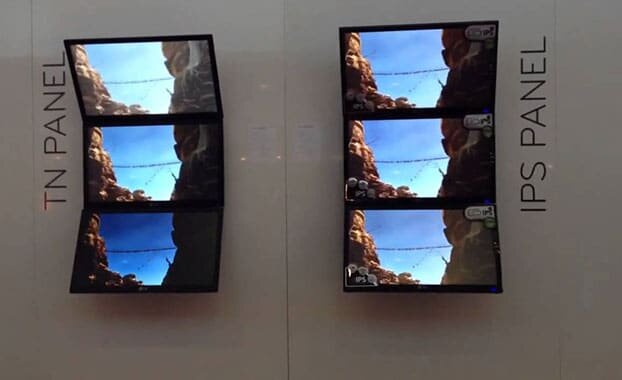 Twisted Nematic, or TN, is the oldest and most common panel technology in the market. One big reason for their popularity is the cheap price when compared with other types of displays.

These displays usually have very short response time and high refresh rate, which makes them suitable to be used as gaming monitor. In addition to short response rate, these monitors have high brightness level and they also consume less electric power.

On the other hand, the biggest drawback of TN displays is the color shifting at different angles. In simple terms, these displays will have a different tones (like red or blueish) if you look at them through wide angles (both vertically and horizontally).

Some cheap TN displays will shift colors even at some not-so-wide angles.

Apart from this, TN panels are noted have poor color reproduction and that’s why these aren’t suitable for tasks such as video editing and graphics designing etc.

What is an IPS (In-Plane Switching) Display Panel?

IPS stands for In-Plane Switching, and apart from monitors, this panel technology is also used in smartphones. This technology was introduced as an improvement to the existing TN panels, and it did so on a large part, by having more color accuracy as well as better viewing angles and higher resolutions.

But, they are far from perfect when you look at other aspects. They have low refresh rate and high grey-to-grey time, when compared to TN panels. That’s why these panels have less contrast level and a bit lower brightness (against a TN display).

On top of that, these are very prone for screen burn-in/ghosting. Unrelated to ghosting found on gaming keyboards, this effect creates a permanent artifact on your display, due to slow response time.

All these cons makes these panels unsuitable for gaming.

Note: Some manufacturers have now started to produce what they call S-IPS displays. They have high refresh rate than simple IPS panels.

What is a VA (Vertical Alignment) Display Panel?

Until now you guys have read about TN and IPS panels. Both of these panel types are different advantages and disadvantages. Now here comes with VA panels. Also called Vertical Alightment panels, these displays are kind of a middle way between the two extremes of TN and IPS technologies.

These panels are manufactured like the TN panels, but have improved color quality. Likewise, VA panels have better contrast ratio and deep blacks. They have low response rate as compared to TN panels, but it’s still better than what it is in IPS displays.

And now comes the favorite part.

As you may have probably realized by now, TN panels are still best when it comes to gaming monitors. And this won’t change anytime soon.

That being said, if you have something to do with computer graphics, you should opt of an IPS display.

VA panels are jack of both trades. They can give you advantages of both IPS and TN panels, but aren’t perfect for either gaming and graphical work.

So, get them at your own peril.